Hello – My name is Teofilius

Spreading the word about Blessed Teofilius to the English-speaking world

Before the beatification of Archbishop Teofilius Matulionis, a book in Lithuanian (Susipažinkime – esu Teofilius) was written by Msgr. (now Bishop) Algirdas Jurevičius. It was written in the style of a fictional autobiography and presents a unique perspective on Teofilius, bishop and martyr. He was incarcerated several times, spent years in the gulags and was even exiled to the outskirts of Lithuania in his old age by the Soviet occupiers of Lithuania. He always chose to obey God rather than man. The book challenges the reader. It invites him to see what was taking place through the eyes of Teofilius, to get a sense of his situation and emotions when faced with hardships and open hostility.

After the beatification of Teofilius in the square of the Cathedral Basilica of St. Stanislaus and St. Ladislaus in Vilnius on 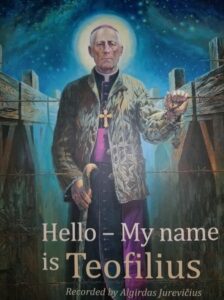 June 25, 2017, Bishop Jonas Ivanauskas, Ordinary of the diocese of Kaišiadorys, where Teofilius once was the bishop and where his remains are entombed in the Cathedral, felt that there needed to be suitable material in English, not only for pilgrims to the tomb of Blessed Teofilius, but also to present Teofilius to the broader worldwide audience—to publicize this man of faith.

Bishop Ivanauskas contacted Fr. Vytautas (Vytas) Staškevičius in Canada and asked him to translate the book into English. He also asked if some benefactors could be found to sponsor the printing of the book. A working group consisting of Rev. Msgr. Jonas Staškevičius, Regina Choromanskis, Jurgis Kuliešius and Fr. Vytas was formed. All had worked on several projects with Bishop Ivanauskas in the past. Regina quickly found a sponsor willing to cover the printing costs of 5,000 copies—her brother-in-law Henry Švažas. Henry and his late wife Diane had for many years been very generous contributors to religious projects in Lithuania and in Canada. The book would be dedicated to the late Diane Švažas. Henry was coopted into the working group for his vast marketing experience and sound advice. One more member was needed to round out the group—an editor to refine the translation. Arūnas Staškevičius readily agreed to join the group. He is the Republic of Lithuania’s Honorary Consul in Montreal and Quebec and possesses an MA in English. He is also the cousin of both Fr. Vytas and Msgr. Jonas, which made working together very easy. The group had only 6 recorded meetings, but countless e-mail and phone discussions regarding matters ranging from the selection of paper stock, to changing the cover design to make it more appealing, to enlarging the book to include maps for the benefit of those not familiar with the locations where Blessed Teofilius was born, educated, carried out his pastoral duties and was exiled. Also included were beatification and post-beatification photographs. The book was entitled “Hello – My name is Teofilius.”

Of the 5,000 books printed, 3,000 were sent to Lithuania, 1,000 were destined for the USA to be distributed by the US Lithuanian Priests’ League and 1,000 remain in Canada. On October 7, Bishop Ivanauskas presented a copy of the book to Toronto’s archbishop H.E. Thomas Cardinal Collins and over 100 copies were distributed to the Canadian Bishops at their annual plenary assembly.

In the USA and in Canada the book is available at Lithuanian parishes and missions. In Canada it can also be obtained through Regina Choromanskis at regina45@sympatico.ca, or by mail at 306 – 75 Duke St., Hamilton, ON L8P 1X4, Canada. In the USA it can be ordered through Fr. Gintaras Jonikas at gjonikas@gmail.com or by mail at Divine Providence Lithuanian Catholic Parish, 25335 West Nine Mile Road, Southfield, Michigan, 48033, U.S.A. Elsewhere in the world it can be obtained through the Diocese of Kaišiadorys at kurija@ks.lcn.lt or by mail at Kęstučio g. 44, 56124, Kaišiadorys, Lithuania.

Lithuanian martyr stood up to the Soviet regime

VIDEO: Check out these highlights of Pope Francis' two days in Lithuania!